General elections were held on 11 August 2016 to elect the President and National Assembly.[2][3] A constitutional referendum will be held alongside the elections, with proposals to amend the bill of rights and Article 79.[4]

The previous general elections in 2011 resulted in a victory for the Patriotic Front (PF), whose candidate Michael Sata was elected President, with the PF winning 61 of the 150 seats in the National Assembly.[5] Following Sata's death in October 2014, early presidential elections were held to elect a successor to complete the remainder of his five-year term, and PF candidate Edgar Lungu was elected. Edgar Lungu beat Hakainde Hichilema of the United Party for National Development by just 27,757 votes and the opposition has yet to accept the credibility of the election.[6]

Although previously the President had been elected in a single round of voting by the first-past-the-post system, in 2015 the National Assembly approved the change in the constitution to change to a two-round system.[7] The constitutional change also introduced the concept of running mates; previously the vice president was appointed after the elections. The running mate, now being an elected member, can assume office directly if the president is deemed unfit to rule.[8]

The voting age is 18, whilst National Assembly candidates must be at least 21.[10]

A total of nine candidates along with their running mates registered to run for the presidency. Out of the 46 political parties, only five managed to pay their candidate's deposit by the deadline of 17 May 2016. The deadline was subsequently extended by a day, with four other parties nominating a candidate.[11]

The race is expected to be a close race mainly between Edgar Lungu of the Patriotic Front and Hakainde Hichilema of the United Party for National Development. Both leaders competed in the 2015 presidential elections and Lungu won by a very narrow margin.[8] 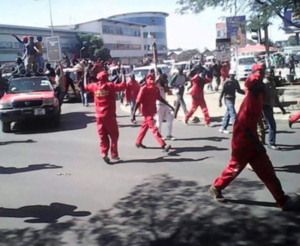 UPND cadres along Cairo Road as they marched to Chawama. 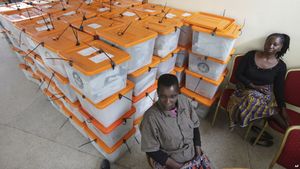 There was a lot of controversy in the printing of the ballot papers; previously all ballot papers had been printed in South Africa, but the Electoral commission of Zambia awarded the contract for the 2016 elections to a firm in Dubai. The contract was significantly more expensive and many opposition parties criticised the move. Parties opposed the move as printing the ballot papers outside Africa was expensive to verify and increased the chance of electoral fraud.[21] To counter the suspicion of rigging, the Electoral Commission allowed party officials to travel to Dubai to witness the printing of the ballots; all ballot papers were to be only released if all party officials approved of the process.[22] The printing was completed on 20 July 2016 and the ballots were transported to Zambia on 28 July 2016.[23] However, concerns with respect to the transport and distribution of the ballot papers then arose. The Zambian Air Force were responsible for distributing the ballots across the country.[24]

Results announced by the electoral commission on 15 August 2016 showed Edgar Lungu winning the presidential election with slightly more than 50.35% of the vote, ahead of his only serious competitor, Hakainde Hichilema, who received almost 47.63%

The main opposition critisized the electoral commission for participating in fraud as they significantly delayed the announcement of the results. Claiming that the slow counting of the votes is unexplained.

Election officials denied this, saying the slow publication of the results was because there were five different votes on Thursday - for president, parliament, mayors, local councillors and an amendment to the constitution on changes to the bill of rights.[25]

15 Aug 2016: Riots in Southern Province after re-election of Edgar Lungu

PF members took to the street to celebrate Lungu's victory,[28] whilst riots took place in most parts of the country leading to property being destroyed and roads blocked. 133 protesters were arrested.[29]. The UPND rejected the results, saying that the electoral commission had colluded to rig the result in favour of Lungu,[30] also stating that they would appeal the results at the Constitutional Court, accusing election officials of fraud during the count.[30]

On 16 August, Lungu held a celebratory rally at Woodlands Stadium in Lusaka as his re-election secured him another 5 years.