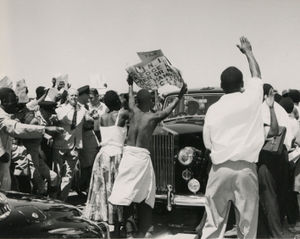 The United National Independence Party (UNIP) is a political party in Zambia. It governed the country from 1964 to 1991 under the presidency of Kenneth Kaunda, and was the sole legal party between 1973 and 1991.

The party was founded in October 1959 as a successor to the Zambian African National Congress, which had been banned earlier in the year. It was initially led by Mainza Chona as ZANC leader Kaunda had been imprisoned, but upon his release from jail in January 1960, Kaunda assumed the party's leadership.[1]

In the 1962 general elections the party won 14 seats, making it the second largest party behind the European-dominated United Federal Party (UFP). However, although Northern Rhodesian African National Congress leader Harry Nkumbula had made a secret electoral pact with the UFP, he later opted to form a government with UNIP. After a convincing victory in the 1964 elections, in which UNIP won 55 of the 75 seats, Kaunda became Prime Minister of Northern Rhodesia, leading the country to independence on 24 October that year, at which point he became President.[2]

In the 1968 general elections Kaunda was re-elected president with 82% of the vote, whilst UNIP won 81 of the 105 elected seats in the National Assembly.[2] In 1973 the country became a one-party state with UNIP as the sole legal party; the constitution was altered and promulgated on 25 August 1973, with the 1973 elections described as the final steps in achieving what was called a "one-party participatory democracy." National policy was formulated by the Central Committee of UNIP, the constitution stipulated that the sole presidential candidate was the person selected to be the president of UNIP by the party's general conference, and the second-ranking person in the Zambian hierarchy was UNIP's secretary general. The elections saw the presidency decided on a yes/no vote on the UNIP candidate, whilst multiple UNIP candidates contested the 125 parliamentary seats. Kaunda was re-elected president with 89% of the vote.[2] Elections were held under the same system in 1978, 1983 and 1988.

At the end of 1990 multi-party democracy was reintroduced, resulting in a strong challenge to UNIP in the general elections that year. Kaunda was defeated in the presidential vote by Movement for Multi-Party Democracy candidate Frederick Chiluba, receiving just 24% of the vote. In the National Assembly elections UNIP won 25 seats, whilst the MMD won 125.[2]

Following changes to the constitution which barred Kaunda from running for president again, UNIP boycotted the 1996 elections, although two members contested National Assembly seats. The party returned to contest the 2001 elections with Tilyenji Kaunda as its presidential candidate; he received 10% of the vote, finishing fourth out of the eleven candidates. In the National Assembly elections the party won 13 seats.[2]

Prior to the 2006 elections the party joined the United Democratic Alliance alongside the other two largest opposition parties. United Party for National Development leader Hakainde Hichilema was the alliance's presidential candidate, finishing third. The alliance won just 26 seats in the National Assembly, down from the 74 the three parties had won in 2001.