Southern Province is one of Zambia's ten provinces, and home to Zambia's premier tourist attraction, Mosi-oa-Tunya (Victoria Falls), shared with Zimbabwe. The centre of the province, the Southern Plateau, has the largest area of commercial farmland of any Zambian province, and produces most of the maize crop.

The Zambezi River is the province's southern border, and Lake Kariba, formed by the Kariba Dam, lies along the province's south-eastern edge. The eastern border is the Kariba Gorge and Zambezi, and the north-east border is the Kafue River and its gorge, dividing it from Lusaka Province. The Kafue Flats lie mostly within the province's northern border with Central Province. In the north west lies part of the famous Kafue National Park, the largest in Zambia, and the lake formed by the Itezhi-Tezhi Dam. The south-western border with Western Province runs through the teak forests around Mulobezi which once supported a commercial timber industry and for which the Mulobezi Railway was built.

The provincial capital is Choma. Until 2011 the provincial capital was Livingstone City. The Batonga are the largest ethnic group in the Province. A rail line and the Lusaka-Livingstone road forms the principal transport axis of the province, running through its centre and its farming towns: Kalomo, Choma, Pemba, Monze, and Mazabuka. In addition to maize, other commercially important activities include sugar cane plantations at the edge of the Kafue Flats, and cattle ranching.

Southern Province has the only large source of fossil fuel in Zambia, the Maamba coal mine in the Zambezi valley, served by a branch line of the railway.

For more detail see Southern Province in the Wildlife of Zambia 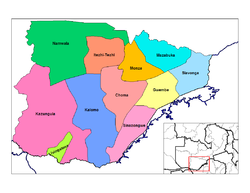 Southern Province is divided into 13 districts: