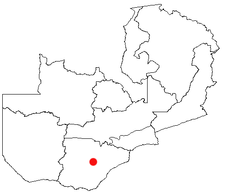 Choma is a market town and capital of the Southern Province of Zambia, lying on the main road and railway from Lusaka to Livingstone. It is home to a small museum dedicated to the cultural heritage of the Tonga people of southern Zambia. The population of Choma is said to be about 40,000 people and it serves as the commercial hub for the central region of the province. The Nkanga River Conservation Area lies nearby.

Choma is also the headquarters of a district of the same name. Most of the district lies at 1400 metres above sea level.

Choma has the typical climate of southern Zambia with temperatures between 14°C and 28°C and sunshine ranging between 9 and 12 hours per day. The highest temperatures occur between the beginning of October and the end of December. Once the rains start, temperatures tend to fall, partly because of the rain and partly due to the often heavy cloud cover. The lowest temperatures are usually recorded in June and July.

The rains generally start in the middle of October and continue through up to the beginning of April. Rainfall reaches its peak around January after which it diminishes slightly up to the beginning of April when usually it ceases entirely. Choma has an average rainfall of 800 mm of which 369 mm falls in January and February. There are variations in total rainfall and rainfall patterns from year to year and even in a particular season. These variations can have a major impact on crop yield. Humidity falls to about 33% until the onset of rains in October after which it skyrockets to about 77% in February. Humidity nosedives once the rains cease in April. The wind is predominantly from the east and south-west, and to a lesser degree from the north-east. The strength of the wind from these directions can be comparatively strong.