Agnes Buya Yombwe (born 1966) is a Zambian painter and sculptor. She was born in Mazabuka, Zambia.

Agnes is Tumbuka and she is the third born in a family of ten. She started drawing when she was in her 8th grade at St Mary's Secondary School in Lusaka. In 11th grade she saw an art competition advertised in the Orbit Magazine. She participated and won a consolation prize. In 12th grade, the art teacher took Yombwe's class for an art exhibition by Lawrence Yombwe, who was later to become her husband.[1]

Agnes received an Art Teachers Diploma from Evelyn Hone College, Lusaka in 1989. She later obtained a certificate in Art and Design from Wimbledon School of Art in London.

She taught Art at Libala and Matero Boys secondary schools in Lusaka. Yombwe conducts weekend workshops for children in her home town, Livingstone.

Agnes is a founder member of the Zambia National Visual Arts Council (VAC). In the 1990s coordinated and facilitated women artists’ workshops at VAC, she served as National Treasurer. She is a prolific and successful experimental artist who has won several awards. [2] 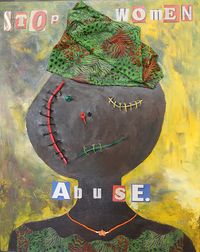 Stop Women Abuse (mixed media) by Agness Yombwe. The painting shows shows a woman in stitches with a disfigured face depicted in a rudimentary and playful manner.[3]

She has held several solo exhibitions in many parts of the world and undertaken prestigious studio residencies at the Edward Munch Studio in Oslo, Norway in 1995 and at the McColl Centre for Visual Art in North Carolina, USA in 2002.

She runs a private Studio and Gallery called Wayi Wayi in the tourist capital of Zambia, Livingstone. [2]

Agnes is married to accomplished painter and one of Zambia’s foremost artists, Lawrence. The two met at art college and later got married.