As of late December 2007, the total population was estimated at 17,460 southern white rhino in the wild, making them by far the most abundant subspecies of rhino in the world. South Africa is the stronghold for this subspecies (93.0%), conserving 16,255 individuals in the wild in 2007. However, the current census from Save the Rhino's official website revealed there are 19,682–21,077 southern white rhinoceros since 2015.[2]

Ceratotherium simum kiaboaba (or Rhinoceros kiaboaba), also known as straight-horned rhinoceros, was proposed as a different variety found near Lake Ngami and north of the Kalahari desert. However, it was discovered to be an actual southern white rhinoceros.

Following the phylogenetic species concept, recent research in 2010 has suggested the southern and northern white rhinoceros may be different species, rather than subspecies of white rhinos, in which case the correct scientific name for the northern subspecies is Ceratotherium cottoni and the southern subspecies should be known as simply Ceratotherium simum. Distinct morphological and genetic differences suggest the two proposed species have been separated for at least a million years.[3] 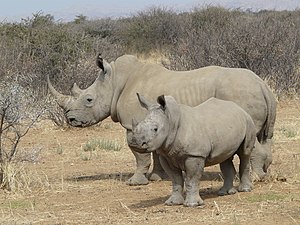 A southern white rhino mother with calf in Namibia.

The southern white rhinoceros is one of largest and heaviest land animals in the world. It has an immense body and large head, a short neck and broad chest. Females weigh 1,700 kg (3,700 lb) and males 2,300 kg (5,100 lb).[4] The head-and-body length is 3.4–4 m (11.2–13.1 ft) and a shoulder height of 160–186 cm (5.25–6.10 ft).[4] On its snout it has two horns. The front horn is larger than the other horn and averages 60 cm (24 in) in length and can reach 150 cm (59 in).[5] Females usually have longer but thinner horns than the males which is larger but shorter. The southern white rhinoceros also has a prominent muscular hump that supports its relatively large head. The colour of this animal can range from yellowish brown to slate grey. Most of its body hair is found on the ear fringes and tail bristles, with the rest distributed rather sparsely over the rest of the body. Southern white rhinos have the distinctive flat broad mouth that is used for grazing.

The southern white rhino live in the grasslands and savannahs of southern Africa, ranging from South Africa to Zambia. About 98.5% of southern white rhino occur in just five countries (South Africa, Namibia, Zimbabwe, Kenya and Uganda). The southern white rhino was the most endangered species. The species was nearly extinct with just less than 20 individuals in a single South African reserve in early 20th century. Fortunately, the small population of white rhinoceros has slowly recovered during the years, having grown to 840 individuals back in 1960s to 1000 in the 1980s. White rhino trophy hunting was legalized and regulated in 1968, and after initial miscalculations is now generally seen to have assisted in the species' recovery by providing incentives for landowners to boost rhino populations.[6]

The southern white rhinoceros is listed as Near Threatened, though it is mostly threatened by habitat loss, continuous poaching in recent years and the high illegal demand for rhino horn for commercial purposes and the traditional Chinese medicine.[1] 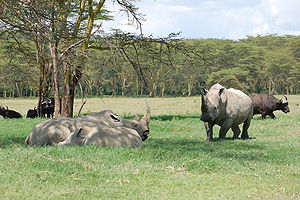 There are smaller reintroduced populations within the historical range of the southern white rhinoceros in Namibia, Botswana, Zimbabwe, Swaziland, Zambia and in southern Democratic Republic of the Congo, while a small population survives in Mozambique. Populations have also been introduced outside of the former range of the species to Kenya, Uganda and Zambia, where their northernmost relatives used to occur.[7] The southern white rhinoceros have been reintroduced in the Ziwa Rhino Sanctuary, the Murchison Falls National Park in Uganda and in the Lake Nakuru National Park and the Kigio Wildlife Conservancy in Kenya.

In 2010, nine southern white rhinoceros were imported from South Africa and shipped to the Yunnan province from southeast China where they were kept in an animal wildlife park for acclimation. In March 2013, seven of the animals were shipped to the Laiyanghe National Forest Park, a habitat where Sumatran and Javan rhinoceros once lived.[8] Two of the southern white rhinos began the process of being released into the wild on May 13, 2014.[9]

Wild-caught southern white rhinoceros will readily breed in captivity given appropriate amounts of space and food, as well as the presence of other female rhinos of breeding age. For instance, 93 calves have been born at the San Diego Zoo Safari Park since 1972.[citation needed] However, for reasons that are not currently understood, the rate of reproduction is extremely low among captive-born southern white females.[10]