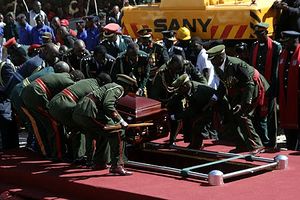 Pallbearers lower the casket for Dr Chiluba into the tomb.

Presidential State funerals in Zambia are the official funerary rites conducted by the government in the nation's capital, Lusaka that are offered to a sitting or former president of Zambia or a president-elect. Only four have been held since 2008.

President Levy Mwanawasa died in office in 2008 while on national duty. In April 2006, Mwanawasa experienced a mild stroke.[1][1][2] On 29 June 2008, while in Sharm el-Sheikh, Egypt, for an African Union summit, Mwanawasa was hospitalised due to a second stroke. On 1 July, International SOS evacuated him by air ambulance to France for further treatment.[2][3] The head of the Egyptian hospital to which Mwanawasa was taken said that the doctors there had stopped the brain haemorrhage and that he was in a semi-comatose state.[3] Vice-President Banda said that his condition was stable, and Minister of Information Mike Mulongoti noted that Mwanawasa had previously suffered from hypertension; Mulongoti also said that Mwanawasa was a "very hard working man" and said that this may have been a factor.[4]

Vice-President Banda said on 18 August that Mwanawasa's condition had suddenly deteriorated and urgent medical intervention was necessary. The intervention was successful, according to Banda, but Mwanawasa remained in serious condition.[5] On 19 August, a family member who wished to remain anonymous stated that Mwanawasa had died early that morning. The news of Mwanawasa's death was confirmed by Banda through a television broadcast on the government-owned ZNBC. He informed the nation that Mwanawasa had died that morning at 10:30 (8:30 GMT) at the Percy Military Hospital in Paris. Expressing "immense grief and deep sorrow", Banda declared national mourning for seven days and urged Zambians to "remain calm and mourn our President with dignity".[6] The mourning period was extended to 21 days on 21 August.[7] 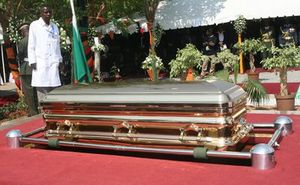 Acting President Banda announced state funeral arrangements for Mwanawasa on 21 August. According to this programme, after Mwanawasa's body was returned to Zambia, it would first lie in state at Mulungushi International Conference Centre in Lusaka, the capital. The body would then be moved to different provincial capitals from 25 to 29 August, after which it would again lie in state at Mulungushi International Conference Centre until 2 September. His burial, planned for 3 September, was intended to coincide with his birthday; Mwanawasa would have turned 60 years old on that date.[8]

Mwanawasa's body arrived in Lusaka from France aboard a French military aircraft on 23 August. It was received with full military honours; Banda and Kaunda were present for the ceremony, which featured a 21-gun salute and jet fighter planes in the sky.[9] It was then taken to all provincial capitals of Zambia, where members of the public had an opportunity to pay their respects. The body was accompanied by both the opposition and the ruling party leaders beside the first family during the tour.

The burial of Mwanawasa occurred on 3 September at Embassy Park opposite the Zambian Cabinet Office. The funeral was attended by heads of 14 African states, including Mbeki, Zimbabwe's Robert Mugabe, and Tanzania's Jakaya Kikwete. In her eulogy at the funeral, Maureen Mwanawasa said of her husband: "Typical of you, you died on duty. You died a sad man as no one seemed to appreciate your sacrifices. Had you been with us today, I am sure these accolades could have made you happy."[10]

Pallbearers lower the casket for Dr Chiluba into the tomb.

Chiluba died on June 18, 2011,[11] shortly after midnight. His spokesman, Emmanuel Mwamba, announced his death. Mwamba stated that Chiluba had a normal day on June 17, and even had time to meet some of his lawyers. He later complained of stomach ache.[11]

Sata is laid to rest

President Michael Sata died in office in 2011. Concerns about Sata's health grew during 2014 and some suggested that he was no longer really running the government due to his condition, although the government denied that. He stopped appearing in public, which seemed jarringly uncharacteristic for the notably extroverted and outspoken president. Observers thought he seemed unwell when he opened parliament on 19 September and over the course of the following month he failed to appear in public again. MMD leader Nevers Mumba alleged that the government was lying about Sata's health.[12] He also missed a speech at the general debate of the sixty-ninth session of the United Nations General Assembly amid rumours he had fallen ill at a New York City hotel.

On 19 October, he left the country for what was described as a medical check-up, leaving Edgar Lungu, the Minister of Defense, in charge of the country in his absence.[13][14] Given the circumstances, including the sudden nature of the trip, Sata's absence from public view and the fact that the 50th anniversary of Zambian independence was only days away, many believed that Sata was very seriously ill.[14]

Sata died on 28 October in London.[15] He was receiving treatment for an undisclosed illness. Cabinet Secretary Roland Msiska issued a statement that he died late in the day. "As you are aware the president was receiving medical attention in London. The head of state passed on October 28. President Sata's demise is deeply regretted. The nation will be kept informed on burial arrangements." When he died at 23:00 in King Edward VII Hospital, his wife, Christine Kaseba, son, Mulenga,[16] and other family members were with him at the time. Vice-President Guy Scott was named acting leader until an election, making him the first white leader of a democratically elected African government and the first since F. W. de Klerk in Apartheid South Africa.

On 14 June 2021, Kaunda was admitted to Maina Soko Military Hospital in Lusaka to be treated for an undisclosed medical condition. The government said medics were doing everything they could to make him recover, though it was not clear what his health condition was. On 15 June 2021, it was revealed that he was being treated for pneumonia, which, according to his doctor, had been a recurring problem in his health. On 17 June 2021, it was confirmed that he died at the age of 97 after that short illness at Maina Soko Military Hospital. Kaunda's funeral took place at Lusaka Show Grounds on 2 July 2021, after his body had its last provincial visit. Ordinary citizens came out to show their last respects as they waved their white handkerchiefs in mourning, an item Kaunda carried with him when he was incarcerated during the struggle for liberation. During the state funeral, a 21-gun salute was given to the former president.