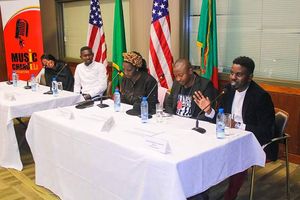 The Music 4 Change Initiative was foundered by Zambian singer and song writer B Flow. It was started in August 2015. The program is open all Zambian musicians who spread a positive message and all their supporters under the record label Chant-It-On Music & Media Limited.

B Flow's Music For Change label was announced by 44th U.S President Barack Obama on July 2nd, 2015 in Washington DC. B Flow's plan was to start an organization for creating an art center, studio and music label that would help young people learn about the music business — and put their own positive spin on it.

It was B Flow's participation in the Mandela Washington Fellowship inspired him to start his Music For Change record label and foundation. On April 7th, 2016, Music For Change partnered with the United States government to launch B Flow's 4th solo studio album Dear Mama at the U.S Embassy in Lusaka making B Flow the first ever to launch a popular music album at an Embassy of the United States.

Music Production, Training in Arts, Social Awareness Events, and Fundraising for the less privileged using the power and influence of music.