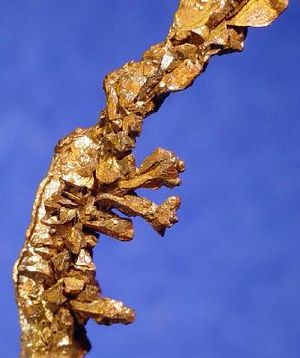 Detail of a specimen of native copper from the Mufulira Mine

Mufulira ("Place of Abundance") is a town with a population of 125,336 (2007) in the Copperbelt Province of Zambia. It was established in the 1930s around the site of the Mufulira Copper Mine on its north-western edge. The town is 16 km from the border of the Democratic Republic of the Congo and is the start of the Congo Pedicle road connecting the Copperbelt to the Luapula Province, making that province Mufulira's commercial hinterland. A tarred highway to the south-west connects Mufulira to Kitwe (40 km) and Chingola (55 km), and another to the south-east connects to Ndola (60 km), the commercial and transport hub of the Copperbelt. A branch of Zambia Railways, carrying freight only, serves the mine.

The Mufulira Mine is now owned and operated by Mopani Copper Mines which employs 10,000 permanent workers and produced about 300,000 tonnes of copper bars in 2007 after the rehabilitation of the Mufulira copper smelter by SMEC South Africa (formerly Vela VKE). Production and employment levels are down from the 1969 peak when the Copperbelt made Zambia the world's 4th largest copper producer.