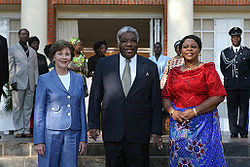 Maureen Mwanawasa (born April 28, 1963 Kabwe, Zambia) is a Zambian politician and former First Lady of Zambia from 2002 until 2008. She is the widow of former President Levy Mwanawasa, who died in office in 2008.

She is the past president of the Organisation of African First Ladies Against HIV/AIDS and founder of the Maureen Mwanawasa Community Initiative (MMCI) in 2002. She was also the joint owner of Mwanawasa & Company, her husband's law firm, until he entered into politics and left his private practice.

Mwanawasa was a Jehovah's Witness, but in 2001 she was excommunicated for being actively involved in politics.[4]

In May 2016, Mwanawasa announced her candidacy for Executive Mayor of Lusaka under the sponsorship of the United Party for National Development (UPND) in the 2016 general election held on August 11, 2016. Mwanawasa, who filed her nomination papers on May 30, 2016, received the endorsements of former President and Vice President Guy Scott, as well as former MPs Sylvia Masebo and Obvious Mwaliteta.[5] She pledged to curb the city's cholera outbreaks and water shortages if elected.[5] Mwanawasa also promised to clean up the city's chronic garbage and litter problems by creating a now garbage collection system, saying "Everywhere you look around in Lusaka, there is garbage and this should change starting this week when we form government. There is no way our beautiful city can be floating on garbage...The levels of indiscriminate disposal of garbage in Lusaka city are alarming. When you are on the streets of Lusaka, you look west you see garbage, you look east you see garbage, you look north, it’s garbage, you look south it’s garbage. This is unacceptable. Would you like it if your house was filled with garbage and there is bad odour all around? The answer is no. We need to maintain our hygiene and stay healthy and fit. It is our duty to keep our city clean not only for us, but also for the people visiting our city and also for the future generations."[6]

Mwanawasa placed second in the Lusaka mayoral election on August 11, losing to the Patriotic Front (PF) candidate, Wilson Kalumba.[6] Kalumba won the election with 270,161 votes, while Mwanawasa came in second place with 150,807 votes.[6]