Julia Chikamoneka (born Julia Mulenga Nsofwa and popularly referred to as Mama Chikamoneka) (1910 — 20 March 1986) was a fierce activist and freedom fighter in colonial Zambia. Chikamoneka was a moniker she adopted to hide her identity when mobilising citizens to avoid being jailed, which happened quite routinely. The literal translation in Bemba is “it will be seen.” She was famously dubbed "Mama UNIP" for her relentless fearless often guerrilla tactics.

Chikamoneka organised women protests against colonial oppression and was a founding member of the Women’s Brigade in 1951. The Brigade housed nationalist leaders, raised funds for the cause and organised events across the country.[1]

She was born Julia Mulenga Nsofwa in 1910 to a British Army African Sergeant who served in the First World War. At the age of 28, she travelled with her husband to Lusaka to seek employment.

Mama Chikamoneka became one of the pioneers of political engagement and activism for freedom from colonial rule. Her courage, bravery and pride won her fame and respect among women countrywide in fighting for independence.[2] She encouraged fellow Africans to determine the political destiny of their country.

In 1948, she and other freedom fighters formed the Northern Rhodesia Teacher’s Welfare Association, led by David Yamba, which was later transformed into a political party called Northern Rhodesia African Congress (NRAC). Late Harry Mwaanga Nkumbula, who had just returned from studies in London, assumed its leadership.

Mama Chikamoneka was incredibly effective at recruiting and was often at the forefront of the protests and marches she organised. She also rallied women to boycott butcheries which abused their African customers and often sold inferior meats.[1]

In 1951, political activism heightened and Mama Chikamoneka became a founder member of the Women’s Brigade and played a key role in raising funds for freedom fighters who were jailed by the colonial regime.

ZANC was later banned, its leaders arrested and detained, but Mama Chikamoneka, along with other women such as Zambia's first ever First Lady Mama Betty Kaunda, Emelia Saidi and Mandalena Mumba, organized a new political party called the African National Independence Party (ANIP). They petitioned the colonial authorities over the starving families of the detained leaders and also fought legal battles for their release.

She was often arrested for inciting other citizens, hence she sometimes faked her name to Julia Chikamoneka ICO Mutusakamikila (meaning Julia, the secret of oppressing us shall be revealed).

Her home was used as a meeting place for other leaders of the nationalist movement who were in hiding, and was in fact where the African National Independent Party was formed. This party later morphed into the United National Independence Party (UNIP) which was later led by Zambia’s first president, Kenneth Kaunda. 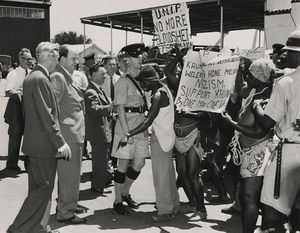 Mama Julia Chikamoneka led protest during the visit of the Colonial Secretary, Reginald Maudling at the Legislative Council in 1961 - The National Archives UK

In March 1960, Mama Chikamoneka, with other women, marched to the District Commissioner’s office where they intruded and slapped him. Then, accompanied by Emilia Saidi and Mandalena Mumba, proceeded to strip down to her waist before leading a group of women protesters on a march to the national airport.[3]

Mama Chikamoneka’s most legendary act of defiance was her decision to march half naked with other activists in public to protest the abhorrent colonial regime and to call for immediate independence. This happened in 1960 when Ian McLeod, Secretary of States for the Colonies, visited Zambia (then Northern Rhodesia). McLeod famously wept as a result of this action, and Chikamoneka called it “the most amusing incident in my life.” In her view, to show her nakedness was the highest form of anger and the only weapon she had – she wanted to highlight the suffering of the people. [1]

In 1961, Chikamoneka and the league of women protested outside the Legislative Council during the visit of the Colonial Secretary, Reginald Maudling.

Around 07:00 hours on 20 March 1986, Mama Chikamoneka passed on at the age of 76. At her death, fellow freedom fighter Mama Kankasa described her as ‘a torch bearer of the Women’s League.’[4]

Mama Chikamoneka was honoured for her role in the nationalist struggle by former president Kaunda, and when she died at age 76 in 1986 was given a state funeral.[1]