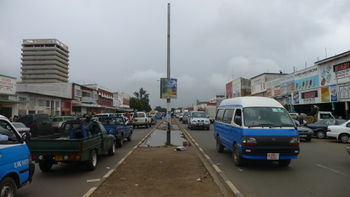 Street view in Lusaka with signs in English.

Zambia has several major indigenous languages, all of them members of the Bantu family, together with English, which is the official language and the major language of business and education.

Zambia is widely claimed to have over 72 languages, although many of these might be better regarded as dialects. Some of these languages have a long history within Zambia, while others, such as Lozi, arose as a result of 18th and 19th-century migrations. All of Zambia's vernacular languages are members of the Bantu family and are closely related to one another.

Seven vernacular languages have official status. Together these represent the major languages of each province: Bemba (Northern Province, Luapula, Muchinga and the Copperbelt), Nyanja (Eastern Province and Lusaka), Lozi (Western Province), Tonga (Southern Province), and Kaonde, Luvale and Lunda (Northwestern Province). These seven languages are used, together with English, in early primary schooling and in some government publications. A common orthography was approved by the Ministry of Education in 1977.[1][2]

In some languages, particularly Bemba and Nyanja, Zambians distinguish between a "deep" form of the language, associated with older and more traditional speakers in rural areas, and urban forms (sometimes called "town language" or Chitauni, such as Town Bemba and Town Nyanja) that incorporate a large number of borrowings from English and other innovations.

An urban variety of Nyanja is the lingua franca of the capital Lusaka and is widely spoken as a second language throughout Zambia. Bemba, the country's largest indigenous language, also serves as a lingua franca is some areas.

English, the former colonial language, serves as a common language among educated Zambians. At independence in 1964, English was declared the national language. English is the first language of only 2% of Zambians but is the most commonly used second language.

The English spoken in Zambia has some distinctive features, such as the omission of certain object pronouns that would be obligatory in Western English ("Did you reach?"), the simplification of some phrasal verbs ("throw" instead of "throw away"), subtle differences in the usage of auxiliary verbs such as "should", simplification of vowel sounds (Some Zambians may regard "taste" and "test" as the same word), and the incorporation of particles derived from Zambia's indigenous languages (such as chi "big/bad" and ka "little"). Zambian English also incorporates South African words such as braai for "barbecue".

See also Zambian slang, although note that the features listed above are standard within Zambia and should therefore not be regarded as slang.