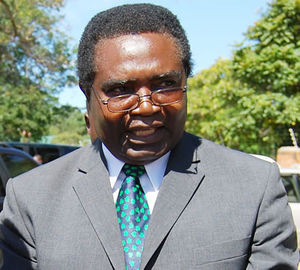 He is a trained Caterpillar salesman, having attended intensive earth-moving science and sales courses in Nairobi, Kenya and Malaga, Spain. He learnt to operate most Caterpillar earth moving equipment. He is also a qualified Public Service Vehicle Driver. In 1980, General Miyanda was dismissed from the army by Dr Kenneth Kaunda for involvement an alleged coup plot. He was blacklisted for many years, he humbled himself by driving a taxi cab! He was subsequently cleared of all the charges.[1]

He joined the growing opposition to Kenneth Kaunda and was later one of the senior members of the Movement for Multi-Party Democracy (MMD).He subsequently served as Chiluba’s minister without portfolio and National Secretary of the ruling, Movement for Multi-Party Democracy up until 1995. In 1993, after the resignation of Levy Mwanawasa, Gen Miyanda was appointed as vice president in Dr Frederick Chiluba’s government. In 1997, he was demoted from vice president to minister of education. But he remained the vice president of the ruling party (MMD).

At the 1995 party convention he was elected the party's vice president until he was expelled, together with the famous 22 senior party officials, in 2001 for opposing late President Frederick Chiluba's third presidential term bid. The third term bid was actively supported and led by the former Zambian President Michael Chilufya Sata then National Secretary and CEO of the MMD.

From 2001 to date General Godfrey Miyanda is serving as president of the Heritage Party in Zambia. It was formed after his expulsion from the Movement for Multi-Party Democracy (MMD) in May 2001 for opposing the third term bid for president. In 2001 general elections, the party won four parliamentary seats in a unicameral Zambian parliament. The party also won a few local councilors positions across the country. However, the four members of parliament were poached by the then late Zambian president Levy Mwanawasa by including them in government ministerial positions to strengthen parliament numbers. In subsequent elections in 2006, the four members joined then ruling MMD party and heritage lost all seats in parliament.

Frederick Chiluba.[2] Brigadier General Miyanda can be described as a perennial candidate. He has unsuccessfully run for president four times (2001, 2006, 2008 and 2011).