Chelenje House was the residence of Dr. Kenneth Kaunda, Zambia's first republican president, from 13 January 1960 to 27 December 1962, when he shifted to Government House. House No. 394 was the hub of political activity. Major emancipation crusades such as the constitutional Conference of 1960 and the Cha Cha Cha campaigns were coordinated when Dr. Kaunda lived in this house and he also directed the struggle for Independence of Zambia, which was finally achieved on 24 December 1964.[1] . The house is now protected and preserved for posterity, educational and enjoyment. The personal stuff used by Dr. Kaunda's family are still preserved and are kept in good condition. It is described as a simple two-bed roomed residential house with a small living room and a kitchen. It lies in a spacious compound littered with giant trees that seem to thrive on a stony ground."[2]

Three houses are included in the protected monument, and have been restored as nearly as possible to their 1962 condition by the demolition of improvements effected since that date. House No. 394 has been redecorated in its original colour scheme, and much of the furniture and kitchen utensils and personal effects used by the Kenneth Kaunda family at that time has been replaced in the original positions. House No. 395 contains displays illustrating the history and growth of Lusaka from the earliest times and the political development of Zambia. House No. 393 is the caretaker’s residence. 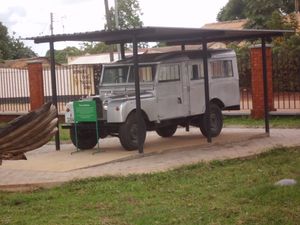 Dr Kaunda's landrover in 2015 after its was given a makeover. 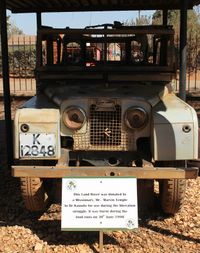 This Land Rover 108 Land Rover Series 1 (1956) was donated by a missionary Mr Marvin Temple to Kenneth Kaunda to use during the liberation struggle. Unfortunately, it was burnt during the food riots on 30 June 1990. It is now stationed at Chilenje House 394.

There is also the Land Rover which Dr Kaunda and his colleagues used during the independence resistance. The first owners of the vehicle where the United Society of Christian Literature (USCL) who registered it as a new car on 31st December, 1957 in Kafue at K15848 after importing if from the United Kingdom. The USCL owned this vehicle for almost three years. The vehicle was used to distribute Christian and educational materials to several parts of the country.

On 8 March, 1960 Reverend Merfyn M. Temple of the same society became the new owner of the Vehicle. His ownership lasted until 20 January, 1961 when donated it to the United National Independence Party and was used by Dr. Kaunda and his colleagues. Dr. Kaunda and his colleagues used the Land Rover extensively during the political movement between 1961 and 1962. The vehicle soon become a common spectacle and its noise a melodious tune to the party supporters. They soon nicknamed it as Mama UNIP.

In 1990, the vehicle was extensively damaged during the food riots.

The site was declared as a National Monument and its doors opened to the public on 23 October, 1968[3] [4]. It has since been managed by the National Heritage Conservation Commission.