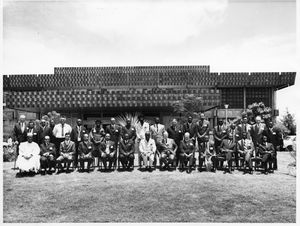 Commonwealth Heads of Government at CHOGM in Lusaka, Zambia, 1979

The fith Commonwealth Heads of Government Meeting 1979 was the fifth Meeting of the Heads of Government of the Commonwealth of Nations. 39 countries attended the meeting, 27 were represented by their Presidents or Prime Ministers.[1] It was held in Lusaka, Zambia, between 1 August 1979 and 7 August 1979, and was hosted and chaired by that country's President, Kenneth Kaunda.

Issues discussed at the conference included the situation in Rhodesia, the armed conflicts in Indo-China, the global growth of the refugee problem, the situation in Cyprus and Southern Africa. Mr Shridath Ramphal was re-appointed as Commonwealth Secretary-General during the meeting. The Lusaka Declaration of the Commonwealth on Racism and Racial Prejudice was issued at the end of the CHOGM, including a special declaration condemning apartheid.[2] [3]

In a book 'Monarchy and the End of Empire' (Oxford University Press, 2014), author Professor Philip Murphy discloses how Queen Elizabeth 11 used royal clout to persuade President Kenneth Kaunda and his main political adviser Mark Chona, to drop parts of a planned speech which could have given offence to people who did not like to hear men like Robert Mugabe and Joshua Nkomo referred to as “freedom fighters.”[4]