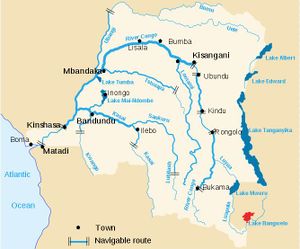 Bangweulu — 'where the water sky meets the sky' — is one of the world's great wetland systems, comprising Lake Bangweulu, the Bangweulu Swamps and the Bangweulu Flats or floodplain.[1] Situated in the upper Congo River basin in Zambia, the Bangweulu system covers an almost completely flat area roughly the size of Connecticut or East Anglia, at an elevation of 1,140 m straddling Zambia's Luapula Province and Northern Province. It is crucial to the economy and biodiversity of northern Zambia, and to the birdlife of a much larger region, and faces environmental stress and conservation issues.[2]

With a long axis of 75 km and a width of up to 40 km, Lake Bangweulu's permanent open water surface is about 3,000 km², which expands when its swamps and floodplains are in flood at the end of the rainy season in May. The combined area of the lake and wetlands reaches 15,000 km². The lake has an average depth of only 4 m.[3][4]

The Bangweulu system is fed by about seventeen rivers of which the Chambeshi (the source of the Congo River) is the largest, and is drained by the Luapula River.[1] 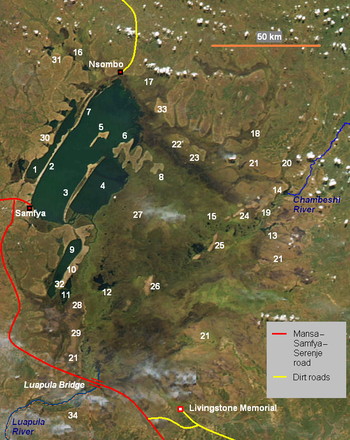 Numbers in round brackets like so — (12) — refer to locations on the satellite image.

A notable feature of the Bangweulu system is a series of parallel sandy ridges running south-west to north-east. These are particularly striking in satellite photographs and are easily seen along the north-western shore, the Lifunge Peninsula (2), Mbalala Island (3), Chilubi Island (6), and the Kapata Peninsula (10). They divide the lake into three sections parallel to its main axis. One divides off a section called Lake Chifunabuli (1), 50 km long but only 5 km wide. Its entrance through a gap in the sand spits (at the end of Lifunge Peninsula) is only 250 m wide. Another sandy ridge, Mbabala Island, divides off a section called Lake Walilupe (4), 30 km long by 13 km wide. The main, middle section of the lake between Ifunge and Mbabala is known only as Bangweulu.[5]

There are numerous bays, inlets, smaller lakes and lagoons around Lake Bangweulu, connected by open water, narrow channels or swamps. The largest is Lake Kampolombo (9), 30 km by 5 km, south of Lake Walilupe and connected to it by a 7 km channel. The 32 km long Kapata Peninsula lies between Lake Kampolombo and the swamps; at its tip on the eastern side is the 15 km long Lake Kangwena (11).[5]

Only the western side of the lake and some of the islands have a well defined shore, with sandy beaches in places especially around Samfya, though even there, some of the bays and inlets are swampy.[3][6]

The Bangweulu Swamps, larger than the lake, extend from the north-west clockwise around to the south. The main part covers an area of roughly 120 km by 75 km and they are normally not less than 9,000 km².[3][4]

The swamps act as a check on annual flooding downstream in the Luapula by releasing water slowly through many lagoons and channels. They help prevent the Luapula valley being flooded excessively in the rainy season.

Rivers and channels through the swamps

The Bangweulu swamps are fed mainly from the north-east by the Chambeshi River, and drain to the south into the Luapula River. The lake is connected to these rivers, and they to each other, by a complex mass of channels through the swamps that may become choked by vegetation and change their course; there is no easy navigation between them. Floating beds of papyrus may close up the channels to a width allowing only dugout canoes to pass. Motorised vessels are hampered by their width as well as by vegetation clogging propellers. Since colonial times attempts have been made to improve navigation and alter drainage patterns by cutting channels through the swamp. In 1942, attempts were made, with limited success, to cut an outlet from Lake Walilupe to the Luapula's exit from the swamps, to allow motor boats to transport cassava and other produce from the northern area of the lake to Kapalala Ferry on the Luapula and from there to the Copperbelt.[6][7]

There are numerous lagoons in the swamps, the more prominent ones are: Lake Chali (12) in the south-west, Lake Chaya (13) in the east at the mouth of the Lulingilla River in the east, Lake Wumba (14) in the north-east at the confluence of the Chambeshi and Luansenshi (20) Rivers, and the Pook Lagoon (15) in the East near Nsalushi Island (25).[5]

Other features of the swamps

On the northern side there are several wide swampy estuaries where rivers enter the lake or swamps, going from north-west to north-east they are: Lupososhi Estuary (16), Luena Estuary (17), Lukuto Estuary (18), Chambeshi Estuary (19) (and Luansenshi Estuary which feeds into it).[5]

On the eastern and south-eastern sides the swamps are fed by the Munikashi, Luitikila, Lumbatwa, Lukulu and Lulimala rivers.[5] The estuaries of the last three are the main dry season grazing grounds of the Black Lechwe.

In the main part of the swamps, just south of Chilubi Island, is a large area which is very shallow in the flood season and may become fairly dry at the end of the dry season, called the Lunga Bank (27).

The lake is commonly assumed to be a prime habitat for Emela-ntouka, an unknown animal resembling a Monoclonius.

Large grassy floodplains with an area of about 3,000 km² lie mainly south of the swamps, but also in the north-north-east, acting as an extension of the region in the wet season. The southern floodplains are famous for large herds of the near-endemic black lechwe. Further information on wildlife of the wetlands is found on the Bangweulu Wetlands ecosystem page.

The lake was known to Europeans from reports by chiefs such as Kazembe and from Swahili traders, and it was sometimes referred to as 'Lake Bemba' from the name of the dominant tribe. In 1868 explorer and missionary David Livingstone was the first European to see the lake at the north end of the Lake Chifunabuli section. He was taken by canoe as far as Mbabala Island. His last expedition a few years later foundered in the swamps and their maze of shifting channels as he struggled to discover the rivers draining in and out of the lake. He died in 1873 in Chief Chitambo's village on the edge of the southern flood plain, about 100 km from the lake itself.[9] The spot is marked by the Livingstone Memorial (see map). The lake was partially surveyed in 1883 by the French traveller, Victor Giraud, and first circumnavigated by Poulett Weatherley in 1896.[10]

It was a desire for the riches of Bangweulu's fisheries and game-rich floodplain which motivated King Leopold II of Belgium to insist, in border negotiations between his Congo Free State and the British in Northern Rhodesia, on a land corridor reaching Bangweulu from Katanga. This resulted in the shape of the Congo Pedicle (34) which, as it turned out, does not penetrate the area enough to be of the desired value.

The first Christian missions in Bangweulu were founded in the early 1900s under the authority of Bishop Joseph Dupont of the Catholic White Fathers who was based north of Kasama.

The area of the lake is inhabited by Bemba people and affiliated tribes who also speak Chibemba. The Bemba heartland of Paramount Chief Chitimukulu lies to the north-east, around Kasama. 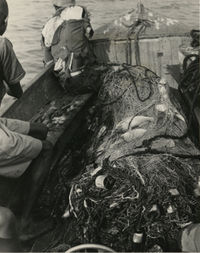 In early 2004 a private European natural gas company finished preliminary plans to lay a pipeline which would cut directly through the Southeast portion of the Lake. Part of this plan was a proposed dam to allow for partial drainage of the required part of the lake. This plan was met with harsh opposition from the local people as well as environmental activists. After much court-wrangling and lengthy hearings on the project, the plan was disposed of by the European company as they built a detour for their pipeline in the surrounding province.

The largest town, Samfya lies on the south western shore and is the principal base for road and boat transport and tourism, as well as being the administrative centre for Samfya District covering about three-quarters of the lake and swamps. Chilubi District covers most of the rest, its boma is on Chilubi Island (6), which is bordered by the swamps to the east. Luwingu District just touches the lake at Nsombo, which is the principal town at the northern end of the lake. Mpika and Kasama districts just touch the eastern and southern margins of the floodplain, and Serenje District and the Congo Pedicle just reach the southern margin of the floodplain.

There are numerous inhabited islands in the Bangweulu system.[5]

On the lake they are:

Flood season islands: on the edge of the swamps, connected to the mainland in the dry season: