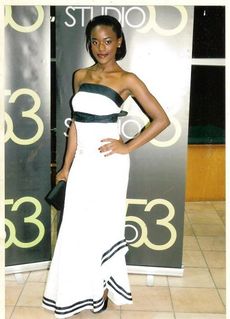 Angela started her fashion career at a tender age in the 90s. Her main source of inspiration comes from her mum, the late Trust Mulenga, a professional designer who built up a college of fashion and a design business that was later taken over by Angela.

After completing high school she studied Business Administration and started designing, along with her aunt.[1] She started designing as ‘Queens wear’ - a fashion label which was founded by her mother.

At age 16, Angela made her debut in Zambia’s fashion industry, buy designing for local and then, upcoming musician, Angela Nyirenda. By the time she turned 18, Angela was one of top ten fashion designers in Zambia. In 2007 Angela won the Young Bridal Designer Awards, in Lusaka Zambia. In October the same year, she showcased for the first time at the ‘ZAMBIA FASHION WEEK’ making her the youngest fashion designer to enter the show.

In February 2010, she was given an opportunity as one of the 10 fashion designers across the continent to showcase at the prestigious M-Net Face of Africa contest where her dress won.

Angela died at the age of 28 on Saturday, May 14, 2016, after she was involved in a road traffic accident along Addis Ababa Drive in Lusaka.[2]