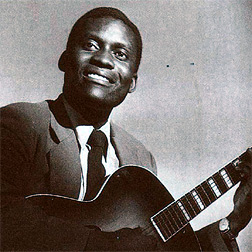 Alick was born in 1922 in the Kasama District to a Tonga father and Bemba mother whose characteristics were later reflected in his art. He trained as a school teacher but when World War II broke out he enlisted with the East African Division and served in Burma.

He began his musical career shortly after returning to Zambia as a field recording engineer for ethnomusicologist Hugh Tracey in 1946.[2] He went on to join the Central African Broadcasting Service (CABS) as an announcer-translator, who also claimed he could 'sing a bit'. The first song on this collection was the most popular of all his songs, but all of them combined traditional and contemporary idioms, elements of town and country, past and present, and of tribal and detribalised society. As Michael Kittermaster, formerly head of broadcasting in Zambia recalled 'The man was true original, who mirrored in his songs something that transcended the barriers of tribe, race and language.'[3]

At first Alick recorded on his own as a sideline to his radio announcing, but in late-'40s he later formed a quartet with the help of Dick Sapseid, Assistant Broadcasting Officer, who played piano and had also led a dance band in England. Like a calypso singer, Alick had the ability to to produce on the spur of the moment songs that were a social commentary on current events, often dealing with social and sexual themes. He also composed explicitly political songs but in the climate of the time these were never recorded. He could in turn be ridiculous (Taxi Driver), melancholic (Chisoni), sentimental (Maliya) or satirical (Abalumendo Bamo). At concerts the audience would be laughing at one moment and crying the next.[3]

Once promoted to Director of Broadcasting and Cultural Services, Alick found less time for playing and recording music but In his years with the radio he made thousands of recordings not only in Zambia but Malawi and Zimbabwe also.

In 1974 he retired to his farm at Mkushi, although he continued to play music. His farm was close to a camp of Zapu guerillas who were then fighting the Smith regime in Southern Rhodesia (now Zimbabwe). One night In October 1978 Smith's forces attacked the camp and Alick was killed in the cross fire.[3] 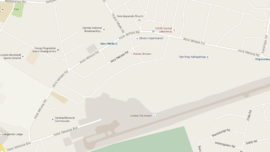 A road in Lusaka, Alick Nkhata Road, was named after him. It is a 4.82 km (2.99 mi) road stretching from Haile Selassie Avenue in Longacres through Kalingalinga to Helen Kaunda. Some of the notable places along this road include the Zambia National Broadcasting Corporation and the Alliance Française de Lusaka.

The traditional music of Zambia was preserved through the efforts of singers such as Alick Nkhata. He devoted his life to producing and recording traditional Zambian music.[2]

An album of Nkhata's best known songs, Shalapo and Other Love Songs: Original Zambian Hits From the 1950s, was released in 1991. A 17-tune compilation, the album was described, by Etna, as "soothing vocal harmonies and prominent guitar or piano accompaniment."[2]