The African bush elephant (Loxodonta africana) is the larger of the two species of African elephant. Both it and the African forest elephant have in the past been classified as a single species, known simply as the African elephant, but recent preliminary evidence has seen the forest elephant classified as a distinct species (although this status is not conclusively accepted due to concerns over conservation strategies until the reclassification is formalised).[2]

The African bush elephant is herbivorous. Its diet varies according to its habitat; elephants living in forests, partial deserts, and grasslands all eat different proportions of herbs and tree or shrubbery leaves. Elephants inhabiting the shores of Lake Kariba have been recorded eating underwater plant life.[9] To break down the plants it consumes, the African bush elephant has four large molars, two in each mandible of the jaw. Each of these molars is 10 centimetres (4 in) wide and 30 centimetres (12 in) long.

Over time, these molars are worn away, and new ones are grown to replace them as the elephant ages. Around the age of 15, the milk teeth are replaced by new ones that last until the age of 30, and then by another set which wear off past the age of 40, being replaced by the last set of teeth that last until about the age of 60–70. Not much later, the animal dies of starvation from not being able to feed correctly. Specimens over 80 years old are known in captivity.

This species typically ingests an average of 225 kilograms (500 lb) of vegetable matter daily, which is defecated without being fully digested. That, combined with the long distances it can cover daily in search of more food, contributes notably to the dispersion of many plant seeds that germinate in the middle of a nutrient-filled feces mound. Elephants rip apart all kind of plants, and knock down trees with the tusks if they are not able to reach the tree leaves.[citation needed] Elephants also drink great quantities of water, over 190 liters (40 imp gal; 50 U.S. gal) per day. 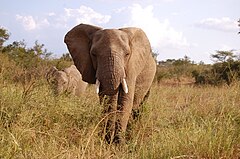 Adult males usually live alone. Herds are made up of related females and their young, led by the eldest female, called the matriarch. Infrequently, an adult male goes with them, but those usually leave the herd when reaching adolescence to form bachelor herds with other elephants of the same age. Later, they lead a solitary life, approaching the female herds only during the mating season. Nevertheless, elephants do not get too far from their families and recognize them when re-encountered. Sometimes, several female herds can blend for a time, reaching even hundreds of individuals.[citation needed]

Elephant cow and her calf

The matriarch decides the route and shows the other members of the herd all the water sources she knows, which the rest can memorize for the future. The relations among the members of the herd are very tight; when a female gives birth, the rest of the herd acknowledges it by touching her with their trunks. When an old elephant dies, the rest of the herd stays by the corpse for a while. The famous elephant graveyards are false, but these animals have recognized a carcass of their species when they found one during their trips, and even if it was a stranger, they formed around it, and sometimes they even touched its forehead with their trunks.[citation needed]

Mating happens when the female becomes receptive, an event that can occur anytime during the year. When she is ready, she starts emitting infrasounds to attract the males, sometimes from kilometers away. The adult males start arriving at the herd during the following days and begin fighting, causing some injuries and even broken tusks. The female shows her acceptance of the victor by rubbing her body against his. They mate, and then both go their own way. After 22 months of gestation (the longest among mammals), the female gives birth to a single 90-cm-high calf which weighs more than 100 kg. The baby feeds on the mother's milk until the age of five, but also eats solid food from as early as six months old. Just a few days after birth, the calf can follow the herd by foot.[citation needed]

An old bull elephant in the Ngorongoro crater. Tuskless bulls are uncommon.

Like all species of elephant, the male African bush elephant experiences musth, a period of extreme aggression accompanied with high testosterone levels. A bull in musth has been known to attack anything which disturbs him including his family members, humans, and other passive animals such as giraffes and rhinoceros.[10] In one case a young male African bush elephant has been witnessed killing a rhinoceros during musth.[11]

The adult African bush elephant generally has no natural predators due to its great size,[12] but the calves (especially the newborns) are vulnerable to lion and crocodile attacks, and (rarely) to leopard and hyena attacks. Some prides of lions prey on both infants and juveniles, especially in the drought months. Lions in Chobe National Park in Botswana have been observed for some time taking both infants (23% of elephant kills) and juveniles. Predation, as well as drought, contribute significantly to infant mortality.

Humans are the elephant's major predator. They have been hunted for meat, skin, bones, and tusks. Trophy hunting increased in the 19th and 20th centuries, when tourism and plantations increasingly attracted sport hunters. In 1989, hunting of the African bush elephant for ivory trading was forbidden, after the elephant population fell from several million at the beginning of the 20th century to fewer than 700,000. Trophy hunting continues today. The population of African bush elephants was halved during the 1980s. Scientists then estimated, if no protective measures were taken, the wild elephant would have been extinct by 1995. The protection the elephant now receives has been partially successful, but despite increasingly severe penalties imposed by governments against illegal hunting, poaching is still common. CITES still considers this species as threatened with extinction.

A 2010 genetic study confirmed the African bush elephant and the African forest elephant are distinct species.[13] By sequencing DNA of 375 nuclear genes, scientists determined the two species diverged around the same time as the Asian elephant and the woolly mammoth, and are as distinct from one another as those two species are from each other.[14] As of December 2010[update], conservation organizations, such as the United Nations Environment Programme's World Conservation Monitoring Centre and the International Union for Conservation of Nature (IUCN), had not distinguished between the two species of African elephants for purposes of assessing their conservation status. As of March 2010[update], the IUCN Red List classified African elephants as a whole as vulnerable species and the Central African elephant population (forest elephants) as Endangered.[2] 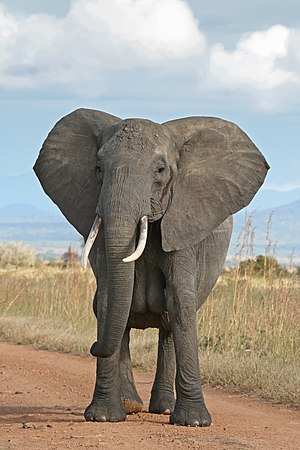 Another possible species or subspecies formerly existed; although formally described [15][16] it has not been widely recognized by the scientific community. The North African elephant (L. a. pharaohensis), also known as the Carthaginian elephant or Atlas elephant, was the animal famously used as a war elephant by Carthage in its many wars with Rome.

There are currently 4 recognized subspecies of African bush elephant, based on minor morphological and genetic differences. However, not all authorities view this as a reliable form of classification. One is now extinct.[17]

While the species is designated as vulnerable,[2] conditions vary somewhat by region between East and Southern Africa. The populations in Southern Africa are thought to be increasing at 4% per annum whilst other populations are decreasing [2]

In 2006, an elephant slaughter was documented in southeastern Chad by aerial surveys. A series of poaching incidents, resulting in the killing of over 100 elephants, was carried out during the late spring and summer of 2006 in the vicinity of Zakouma National Park.[18] This region has a decades-old history of poaching of elephants, which has caused the population of the region, which exceeded 300,000 in 1970, to drop to about 10,000 today. The African bush elephant officially is protected by Chadian government, but the resources and manpower provided by the government (with some European Union assistance) have proven insufficient to stop the poaching.[19]

Human encroachment into or adjacent to natural areas where the African bush elephant occurs has led to recent research into methods of safely driving groups of elephants away from humans, including the discovery that playback of the recorded sounds of angry honey bees are remarkably effective at prompting elephants to flee an area.[20]