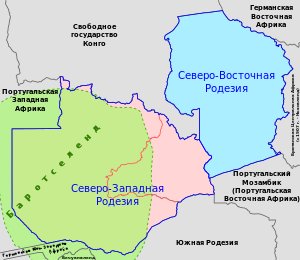 The pink area represents North-Western Rhodesia and the blue area North-Eastern Rhodesia from 1905 until 1911, when they were unified. The red line denotes the border between them from 1899 to 1905. The green area is Barotseland.

The territory consisted of the western half of present-day Zambia up to the Kafue River, its border with North-Eastern Rhodesia. Later the border between the two chartered territories was moved east, but the distinction did not have any great implications. The capital was initially at Kalomo, and moved in 1907 to Livingstone.