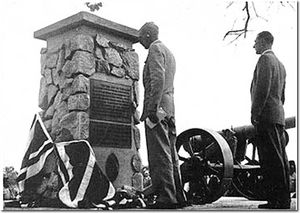 Later in 1918, General von Lettow-Vorbeck surrendered his German forces upon hearing that World War One had ended. He had managed to elude British and Allied forces for the entire four years of the war. Image courtesy of NRZam. 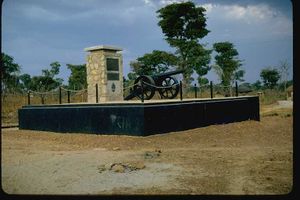 The Chambeshi Monument, in the Northern Province of Zambia, also called the Chambeshi Memorial and the Lettow-Vorbeck Memorial, commemorates the final cessation of hostilities of the World War I, three days after the Armistice in Europe.

The reasons for the monument

The monument bears a plaque which reads:

"On this spot at 7.30 am on Thursday 14th November 1918, General von Lettow-Vorbeck, commanding the German forces in East Africa, heard from Mr Hector Croad, then District Commissioner Kasama, of the signing of the Armistice by the German government, which provided for the unconditional evacuation of all German forces from East Africa".

A second plaque in the Bemba language ends with the words

which means we honour all brave soldiers in this war. (More Africans than Europeans fought and died on both sides in the East African campaign, thousands more Africans who served as porters (sometimes under force) also died, and the civilian population suffered tremendously).[1]

The message given to General von Lettow-Vorbeck was a telegram sent to Croad which read:

"Please send the following to General von Lettow-Vorbeck under a white flag - The English Prime Minister sent notice that on 11th November an Armistice was signed and that the fighting on all fronts should cease on 11th November at 11 o'clock. I order my troops to end hostilities as from now and I expect you to do the same. General van Deventer".

Hence the Memorial marks the cessation of hostilities, not the surrender itself.[2]

The location of the Monument is near the north end of the Chambeshi Bridge (which was built later) on the Mpika-Kasama road. Most accounts of the war say that Lettow-Vorbeck surrendered at Abercorn (now Mbala), 250 km to the north, giving the impression that he penetrated just the few kilometres to Abercorn from German East Africa, but that is only because he was instructed by the British imperial commanders in Northern Rhodesia to march his undefeated troops there for the official surrender on 23 November 1918.

The British force had been waiting in the Abercorn area to attack the German forces coming from northern Mozambique, thinking they would make for Lake Tanganyika, but General von Lettow-Vorbeck had evaded them by turning south-west towards Kasama. Its tiny British population evacuated to Mpika,[3] except for nine who set up two Maxim guns at the Chambeshi, but they did not know how to work them. One, Charlie Simpson, had with him about £10,000 which was all the cash from the government offices and businesses in Kasama, which he buried in a goat pen near the rubber factory he ran, thinking that the goats' hoofprints would hide evidence of digging, and that the Germans would probably be more interested in the goats than looking for the money. On arrival at the Chambeshi the Germans machine-gunned the rubber factory before Croad arrived with the telegram.[4]

Setting up the monument

The Monument was unveiled on 14 November 1953 as a National Monument of Northern Rhodesia (as the country was then) and consists of a large stone platform with the plaques set into a stone pillar, next to a cannon of the era (but not one used by the Germans).[2]