In Zambia, the big five game animals are the lion, leopard, rhinoceros (black and white species), elephant, and Cape buffalo.[1] The term "big five game" (usually capitalized or quoted as "Big Five") was coined by big-game hunters and refers to the five most difficult animals in Africa to hunt on foot. Subsequently the term was adopted by safari tour operators for marketing purposes.[2] The term is used in most tourist and wildlife guides that discuss African wildlife safaris. The members of the Big Five were chosen for the difficulty in hunting them and the degree of danger involved, rather than their size.[2][3]

The big five are among the most dangerous, yet most popular species for big-game hunters to hunt.[4]

Countries where all the members of the big five can be found include Angola, Botswana, Zambia, Uganda, Namibia, Ethiopia, South Africa, Kenya, Tanzania, Zimbabwe, the Democratic Republic of the Congo, Rwanda and Malawi.[5] [6]

The black rhinoceros (Diceros bicornis) is a large, thick-skinned herbivore having one or two upright horns on the nasal bridge. Rhinoceros may refer to either black or white rhinoceros. Among big five game hunters, the black rhinoceros is preferred, although it is now critically endangered. 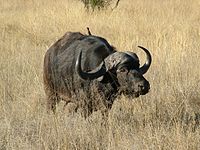 The African buffalo or Cape buffalo (Syncerus caffer) is a large horned bovid. Buffalo are sometimes reported to kill more hunters in Africa than any other animal. A similar claim is also made of hippos and crocodiles, but these statements include all people and not strictly hunters.[8] The Cape buffalo is considered by many to be the most dangerous of the big five, reportedly causing the most hunter deaths,[9] with wounded animals reported to ambush and attack pursuers.[10] 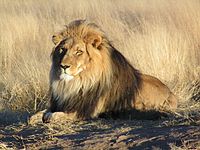 The lion (Panthera leo) is a large carnivorous feline of Africa and northwest India, having a short, tawny coat, a tufted tail, and in the male, a heavy mane around the neck and shoulders. Lions are desirable to hunters because of the very real danger involved. A lion may attack without provocation, and is considered by many to be the best of the big five.[11]

Lion hunting is challenging because of the habitat and temperament of the lion. Lions live in the savanna where tall grasses, shrubs, and bushes obscure them and provide cover and camouflage. This thick undergrowth is commonly referred to as "jess". As lions are ambush hunters, they use this natural cover when stalking to creep as close as possible before making a final charge to catch their prey. Lions do not generally avoid confrontation, but will usually face a challenger. They are unpredictable and may charge when sufficiently annoyed or confronted by danger. These factors together make lion hunting a challenge to hunters.

Lions are hunted by three methods: baiting, stalking, and hounding. The hunting method is dependent firstly on the law, then the number of lions in a given area, the terrain, and the preference and expertise of the professional hunter, or of the concession owner or hunting outfitter and the client.

Baiting involves the hunter lying in wait in a natural or constructed blind. Prior to the lion hunt, a prey species is hunted to use as bait. The bait is then secured to a tree or secure structure in an area which is known to be frequented by lions; usually, this is close to a watering hole. The bait is checked regularly until signs indicate the carcass has been visited by a lion. Then a blind is constructed, usually 30–50 yd (27–46 m) from the bait, where the hunting party can remain concealed, usually from early evening until early morning of the next day.[12]

Stalking involves driving along trails in areas where lions are known to inhabit. Once fresh fæces are sighted, the hunting party (which includes trackers) dismounts. The trackers follow tracks and spoor signs while scanning for the lion. When the lion is spotted, the professional hunter and client stalk in closely until they reach a good shooting position. Hunting lions by stalking is conducted in daylight hours when light is sufficient to spot the lion, which will usually be resting. Night stalking using electric light sources is banned in most countries. Lions hunted with lights may not be listed as trophies by Safari Club International.

Hounding (the method least used today) uses dogs, and may include a fighting pack and a tracking pack. The hunting party drives through known lion territory until fresh spoor is spotted, when the dogs are released. The pack follows the scent trail of the lion. Once the lion is encountered, the pack attempts to hold the lion at bay until the hunting party arrives to dispatch the lion. Like stalking, hounding is usually conducted during daylight hours. The lion usually stands and fights rather than flees.

Many concessions in Africa have been known to release captive lions into enclosed areas where they may be hunted with or without the client's approval and/or knowledge. Sometimes, the lion is drugged to slow it down, making it an easier target.[13] Many hunters and hunting organizations consider this unethical and an affront to fair-chase hunting practices.

The lion has thin skin and does not require the use of a big-bore rifle. Furthermore, lions are evidently susceptible to hydrostatic shock when impact velocities are above 3,000 ft/s (910 m/s). Lion hunting requires at a minimum a .300 Winchester Magnum.[12] However, certain jurisdictions require a .375 H&H Magnum or a 9.3x62mm Mauser as a minimum caliber. A few professional hunters are known to carry 12-gauge semiautomatic shotguns loaded with buckshot as a backup weapon when hunting lion. 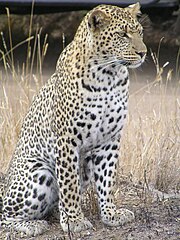 The leopard (Panthera pardus) is a large, carnivorous feline having either tawny fur with dark rosette-like markings or black fur. Of the big five, it is most difficult to acquire hunting licenses for leopards. The leopard is considered the most difficult of the big five to hunt because of their nocturnal and secretive nature. They are wary of humans and will take flight in the face of danger. The leopard is solitary by nature, and is most active between sunset and sunrise, although it may hunt during the day in some areas. Leopards can be found in the savanna grasslands, brush land and forested areas in Africa. Baiting, hounding, and stalking are the most common methods used to hunt the cat.

Baiting is the method most often used to hunt leopard. This requires the finding and then following of spoor in an area known to be frequented by a leopard. Once a suitable area is located, a prey species is hunted and used as bait. Because of the nocturnal nature of the cat, the blind needs to be constructed close to the bait, as shooting will more than likely be during the night. The client and the professional hunter spend the night in the blind waiting for the leopard to come to the carcass.

Hounding with dogs to hunt leopard requires the hunting party to locate an area where a leopard has been recently active, as in the baiting method. Once such an area is located, the dogs (usually bloodhounds or ridgebacks) are released. The dogs attempt to pick up the scent and follow it to the leopard. The leopard usually flees from the loudly baying dogs and takes refuge in a tree or in an area out of their reach. The dogs hold the leopard at bay in this manner until the hunting party arrives to dispatch the leopard.

Stalking is rarely used to hunt leopard, as it is extremely time-consuming and tedious, and has a very low success rate. A month-long hunt using the spot-and-stalk method may not be successful at even sighting a leopard.

The male leopard is less than half the size of a male lion. The leopard is the smallest of the big cats, and rarely exceeds 200 lb (91 kg).

A concerted effort has been made to stop the hunting of the African leopard due to its perceived rarity.